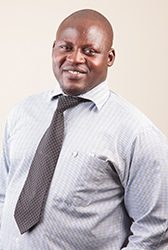 Raymond is a Medical Doctor who attained his Bachelor of Medicine and Bachelor of Surgery (MBChB) from Makerere University in 2007. Thereafter, he worked as a Medical Officer at Mulago National Referral Hospital in Kampala before enrolling into a Master of Medicine in Psychiatry course in 2008 at Makerere University and completed in 2011. In 2012, he joined Makerere Universityas a lecturer, where he teaches both undergraduate and postgraduate courses in the department of psychiatry, clinical care of patients at Mulago National Referral Hospital and conducting research. He has been the coordinator of undergraduate training at the department of psychiatry and the course coordinator for the addiction psychiatry and organic psychiatry courses for postgraduate students. In 2013, he joined the Peter C. Alderman Foundation (PCAF), an organization dealing with mental health problems of people affected by conflict and war in Northern and Eastern Uganda. The organization was also in part the brain child of the Department of Psychiatry. It is while working with this organization as a supervising Psychiatrist that he developed interest in the mental health of post-conflict populations and this set the foundation for his PhD topic of interest. In the same year 2013, he attended the Randomized Clinical Trials training at the University of Cape Town in anticipation of his future involvement with post-conflict populations.