Researchers Learn to Communicate their Research for better Public Engagement 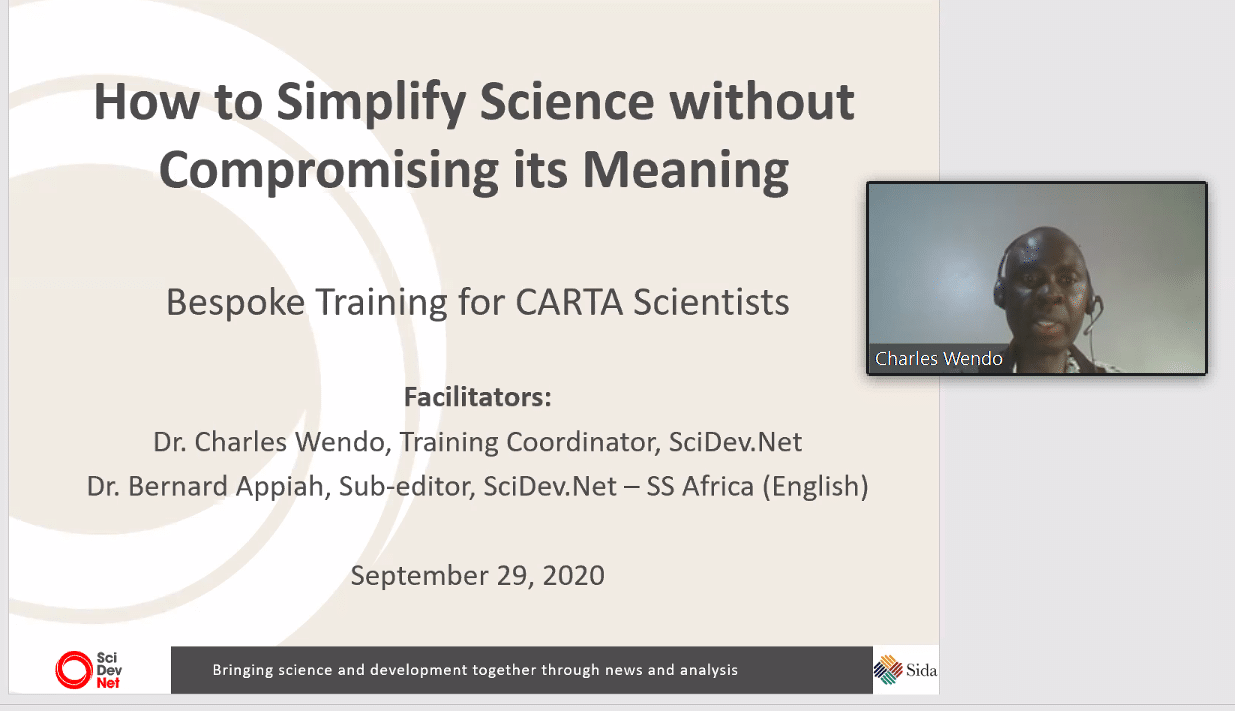 For ages, scientists have dutifully undertaken the task of solving the problems facing humanity through research. However, to no small extent, their findings do not always reach the wider public to which the problem-solving endeavor is intended to benefit. This could be partly due to the scientists’ lack of skills to communicate their findings to an audience that isn’t their peers, including the public and policymakers.

To address this issue, at least in Africa and specifically within its partner institutions, the Consortium for Advanced Research Training in Africa (CARTA) partnered with SciDev.net, supported by the Swedish International Development Cooperation Agency (Sida) to offer research communication workshops to scientists. The workshops were hosted by Obafemi Awolowo University and the University of the Witwatersrand for researchers in those institutions. Initially planned to be held face-to-face, the events had to transition to online learning due to the global pandemic. The two-day workshops, which attracted up to 25 participants each, provided the skills and built the capacity for CARTA fellows, graduates, focal persons, and larger partner institutions. The participants had time to go over the e-learning modules at their own pace in the morning and attended a synchronous session with a communications expert in the evening.

As a follow-up, an online media networking event for the researchers and CARTA fellows was held in November and December 2020 at each of the institutions. The main goal was to enable the researchers to practice how to communicate their work and explain the story behind their research to the journalists present. The researchers also had an opportunity to pitch to experienced Nigerian and South African science journalists.

Dr. Charles Wendo, a renowned science journalist, SciDev.Net training coordinator, and media trainer who hosted and facilitated the event, spoke of media contacts’ importance.  “It is one thing to know how to communicate your research. It is another to have a network of journalists that can potentially report on your findings. As a researcher, know how to identify research issues that are of public interest, then seek the right journalist/s to disseminate your work,” he said.

Researchers’ training on media skills is integral in ensuring that they better articulate the findings of their work. This will enable such findings to reach a wider audience and elicit interest from the public, which is key to embracing it.